Following January’s violent mass protests in Kazakhstan, attempts have been made to analyze the potential for protest movements in Mongolia, a country whose particular geographical location makes it particularly susceptible to the political whims of its only two neighbours: Russia and China. . Thus, some suggested that unlike Kazakhstan, where sectoral or professional solidarity often became the instigator of protests in industrial mono-towns, Mongolia would only see occasional demonstrations provoked by political scandals or staged by political parties rivals. In this regard, the massive and peaceful protests by young people “no political affiliation” which was held on April 7-8, 2022 in Sükhbaatar Square, the central plaza of the Mongolian capital, Ulaanbaatar, seemed a bit odd even for the country’s generally emphatic political life, especially given the absence of youth engagement. Moreover, the protests have sparked an unusually violent response reaction of the security forces, while the videos of police violencethe beatings and arrests spilled over the Mongolian segment of social media, causing confusion and outrage.

Unlike traditional political protests, these protesters did not demand the resignation of the government, but urged the government to do its job, and very soon the movement became known as “Do Your Job!” (Ажлаа хий), while participants complained about corruption, government inefficiency, injustice, debt burden and, of course, inflation. Through their representatives, they handed over to the government a list of fifteen demands, including measures to prevent inflation, revise tax laws, distribute credit fairly, support industrialization, and restrict government duties and expenditures. In addition to the lasting effect of the pandemic, the Russian invasion of Ukraine has recently caused inflation, food shortages and high fuel prices, as Russia’s share in Mongolia’s total imports far exceeds that of any state in Central Asia and the Caucasus except Kazakhstan and Armenia. Moreover, in terms of energy supply, Mongolia is almost entirely dependent on Russia.

The striking feature of these protests, commonly referred to as “youth protests” (залуусын жагсаал), was the fact that Mongolian youth have historically remained the most politically inactive demographic segment. In the last partial parliamentary election of October 2021, the young people had the lowest participation rate less than 40%, while that of citizens aged 60 and over was close to 70%. This time the overwhelming majority of protesters would be between 16 and 24 years old, making it the youngest crowd ever to gather outside the Government Palace, which not only houses the State Great Hural, Mongolia’s parliament, but also the offices of the President and Prime Minister. It should be noted that in January 2021, current President Ukhnaagiin Khürelsükh had to resign as Prime Minister following protests in the same square against the government’s handling of the COVID-19 pandemic, blaming, in the meantime, the then president, Khaltmaagiin Battulga of the Democratic Party for orchestrating the protests. Current Prime Minister Luvsannamsrain Oyun-Erdene is himself well aware of the political efficacy of popular protests, as his rise to the top of the political scene has also been facilitated by numerous protests and demonstrations he led.

Despite the president’s and prime minister’s relative familiarity with political protests, the night of the first day of protests witnessed a huge police presence and excessive use of violence, leading, according to the police, to the detention of 20 demonstrators and 18 others taken to sobering up stations. Interestingly, their rationale for the use of force had much to do with the way common across Central Asiaas they reported the following:

However, it soon became clear that among the young people at the protests voicing their views on justice and legitimacy, some were eager to create chaos, incite conflict or serve as henchmen for some. characters with money.

The police too declaredunsurprisingly, later in the evening, people under the influence of intoxicating alcohol and drugs began to clash and harass the young people, who were voicing their justified grievances.

Remarkably, the youth protests took place on exactly the same dates and in front of the same venue as the long-awaited Mongolia Economic Forum 2022 with his ambition New recovery policy (Шинэ сэргэлтийн бодлого), a ten-year plan aimed at strengthening economic independence, mitigating the negative effects of the COVID-19 pandemic and geopolitical instability, as well as removing obstacles to development. This New recovery policy, itself seen as a step towards the grand long-term development plan Vision 2050 (Алсын хараа-2050), prioritized recovery in the following six areas: border ports, energy, industrialization, urban and rural areas , green development and government efficiency . The policy, however, seemed to pay little attention to poverty and social welfare, with recovery in urban and rural areas, for example, focusing primarily on infrastructure development and the structuring of economic zones.

During the pandemic, Mongolia, unlike most countries, has pursued an extremely restrictive policy by closing its borders, shutting down businesses and banning international travel. Households in urban areas, especially the capital, were reported as most affected by COVID-19. In 2020, the economy suffered its worst decline since the 1990s with a contraction of 5.3%due to “closed borders and low demand for fossil fuels” which have affected its trade with China, with up to 260,000 more people falling into poverty.

Already, before the pandemic, rural poverty in Mongolia was decreasing, while poverty remained essentially unchanged. This is all the more moving since, despite the overall image of the country, urban residents account for nearly 70 percent of Mongolia’s population, which is a far higher percentage than any country in Central Asia and 2.5 times that of Tajikistan. Moreover, literally half of the country’s population lives in Ulan Bator alone, making it an extreme case of disproportionate population distribution in a country whose territory is 3.5 times larger than that of Uzbekistan. 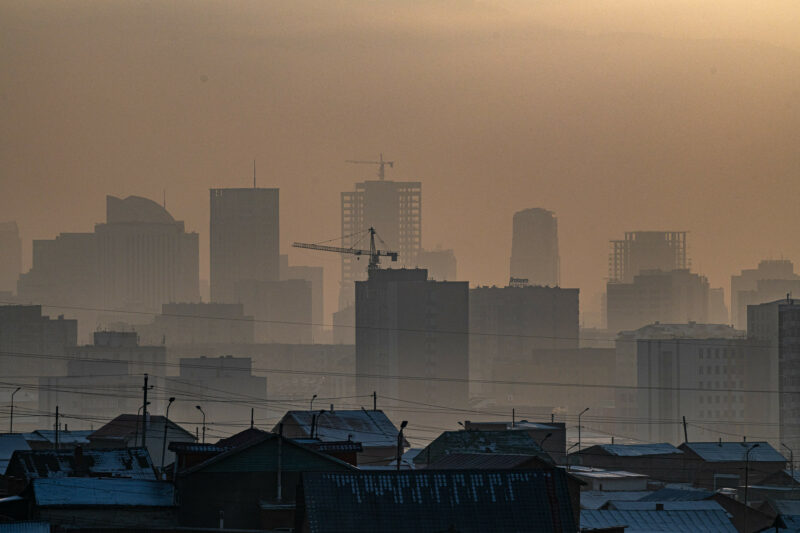 According to official statistics, the urban and rural poverty rates for 2020 were 26.5 and 30.5 percent respectively; however, an impressive 64% of the poor lived in urban areas, with 43% in the capital. Despite its unimpressive size, in 2016 Ulaanbaatar became the most polluted capital in the world, ahead of New Delhi and Beijing, leading to a 270% increase in respiratory infections and a 40% reduction in lung function in children in urban areas. The gradual introduction of ban on the use of unprocessed coal in households has slightly eased the situation, so that New Delhi resumed its lead among the most polluted capitals, but the catastrophic level of air pollution in the Mongolian capital remains a vital challenge along with poverty.

Nevertheless, the government appeared to take the demands of the young people seriously, as the Prime Minister personally appeared in the square and spoke to the protesters, however citing that some of their demands such as tax laws and elections exceed the firm’s competence and must be discussed in parliament. The matter was pushed further by the president, who pressed parliament and the cabinet to urgently implement the protesters’ demands, citing a list of reforms and policies. However, this hasty acceptance of protesters’ demands was also seen as a ruse of the ruling Mongolian People’s Partyeager to achieve their own goals despite youthful protests.