Ulaanbaatar [Mongolia]June 14 (ANI): The four holy Kapilavastu relics of Lord Buddha brought from India by a delegation, led by Union Law and Justice Minister Kiren Rijiju, were displayed with reverence and ceremonial fanfare at the Ganden Tegchenling Monastery in the capital Ullanbaatar on Tuesday.
A sacred procession was also carried out from Sukhbaatar Square near Parliament to Ganden Monastery.
The four Kapilavastu relics, as well as the relic of the tooth of Buddha, a blessed idol of the Mongols, were exhibited for 11 days. 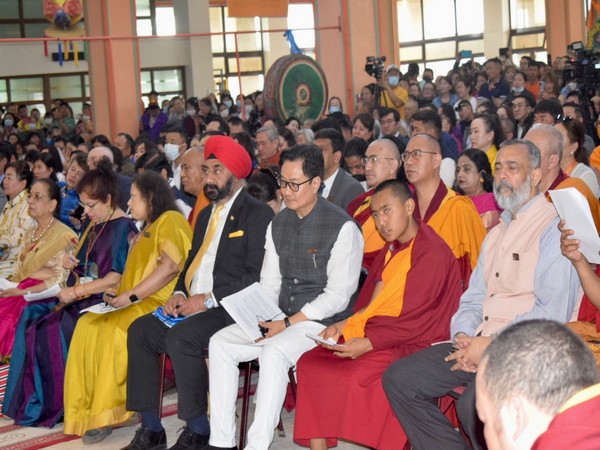 Speaking on the occasion, Kiren Rijiju said: “Centuries ago, the spirit of Buddhism crossed the Himalayan mountains of India to the Mongolian steppes and became our precious common heritage. Since then, this spiritual bond continues to bind the peoples of our two nations. .”
“During Prime Minister Modi’s historic visit in 2015, our relationship was elevated to a strategic partnership and special attention was given to the common heritage of Buddhism between our two countries,” he added.
Khamba Nomun Khan (Khamba Lama) expressed deep gratitude to Prime Minister Narendra Modi for his unconditional support and his decision to send the Buddha’s most precious relics to Ganden Tegchenling Monastery.
Speaking to ANI, Gombojav Zandanshatar said, “I would like to sincerely thank the Government of India for bringing Buddha relics to Mongolia. On behalf of the Parliament of Mongolia and on behalf of the Buddhist community in Mongolia, I would like to thank the Government of India”
Zandanshatar said they are celebrating three sacred events in Buddha’s life today. He added that Mangolia sees India as a spiritual neighbor.
The Speaker of the Mongolian Parliament recalled Prime Minister Modi’s speech during his visit in 2015, where he said that the spiritual quarter is the highest level of cooperation and relationship. “So it’s a great symbol of our spiritual neighborhood to bring Budda’s relics to Mongolia,” Gombojav Zandanshatar added.
The artist Mohit Chauhan, cultural ambassador of Mongolia in India, is also part of the Indian delegation.
“The relations between our countries are extremely beautiful. There is a lot of love and spirituality between us and because of the Buddhist traditions, I look forward to building closer relations between our countries through music. I hope meet more artists from here and hopefully tell people in India about this beautiful country,” added Chauhan.
The holy relics of Lord Buddha returning to Mongolia after 29 years will be available for devotees to pay respect and ask for blessings until June 24. (ANI)

Buddha Purnima in Mongolia – The Statesman